Whining won’t get you to the top

Want to advance?  Stop whining.  Whining won’t get you to the top. 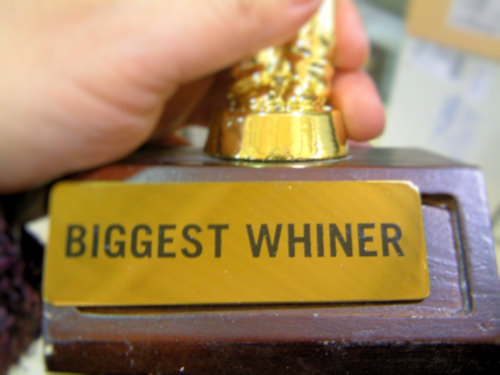 Whining. Just writing the word makes me cringe. Whining is a truly unattractive characteristic. It is unattractive in children and it is even more unattractive when adults partake. One of the reasons why whining is just so unattractive is that it is ineffective and it can make a brilliant leader look like, well, like a blithering child.

Given this, why is there so much whining in the office? Ron Ashkenas, a senior partner at Schaffer Consulting and author of several books on organization change and effectiveness, wrote in a post for the Harvard Business Review:

The reality is that all of us whine, complain, blame others, and try to avoid responsibility. It’s part of the human condition. Nobody likes to clean up problems caused by others — or admit that they’ve created problems themselves. We also try to preserve a positive self-image and we go to great lengths to get others to perceive us positively as well. Given these basic human dynamics, most of which are unconscious, it’s often easier to talk to colleagues about what somebody else is doing wrong. At worst we’ll get sympathy. At best, we’ll convince someone else to take care of the problem.

Ashkens continued, noting that the current economic environment and organizational structures have made it so that “it’s tough to get things done — which leaves people feeling frustrated and in need of a sympathetic ear.” But let’s be honest. When your co-worker comes up to you whining (again) about this or her workload — do you really feel sympathy?

In his book The Last Lecture, Randy Paush astutely wrote:

If you took one-tenth the energy you put into complaining and applied it to solving the problem, you’d be surprised by how well things can work out… Complaining does not work as a strategy. We all have finite time and energy. Any time we spend whining is unlikely to help us achieve our goals. And it won’t make us happier.