Digital and content marketing for the logistics and supply chain industries
Close
May 21, 2015 by Guest contributor 0 comments

How much do your clothes cost – a life?

Lindsey Marley completed dual undergraduate degrees in Business and History at Southern New Hampshire University. She is in her final semester of the MBA program at the University of New Hampshire. In her free time she enjoys traveling, reading, and spending time with her husband and their two dogs. 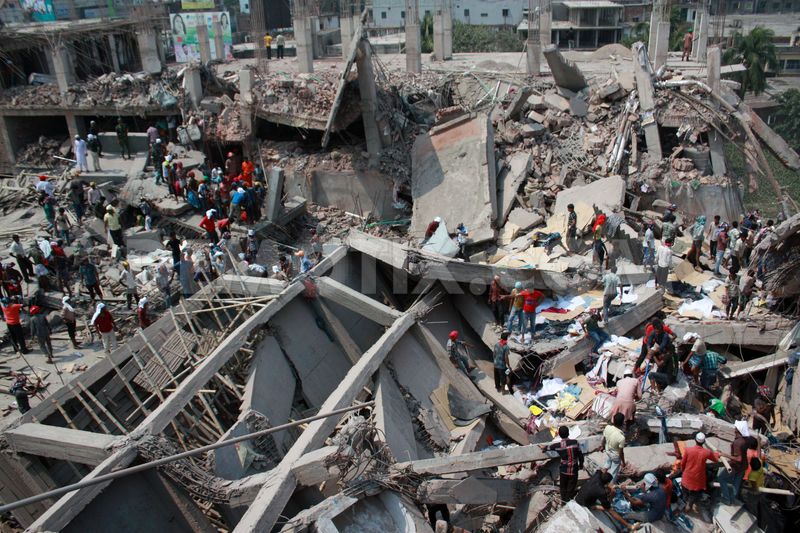 On November 24, 2012 there was a deadly fire at a garment manufacturing company which killed 112 people in Dhaka, Bangladesh. Another manufacturing facility in Dhaka collapsed on April 24, 2013 killing 142 people. The ready-made garment manufacturing industry in Bangladesh has grown to $19 billion dollars and is reported to be one of the most unsafe industries in the world. The consequences of corporations being lax in the sourcing of their products can have horrific consequences for people, the environment, and the company. Consumers in developed countries are demanding companies be more responsible in their sourcing as a result of the wealth of information found on the Internet about the production of goods and services.

The concept of responsible sourcing is in itself still being developed; however, responsible sourcing generally consists of two parts – people and the environment. There are several organizations which have provided guidelines to assist companies in developing their own code of conduct including:

One such industry-specific coalition, which was created in response to numerous tragedies such as those described above, is the Alliance for Bangladesh Worker Safety which was founded in 2013 by a group of North American apparel companies and retailers.

The Alliance created a binding five-year agreement to improve worker safety among the largest importing companies of Bangladesh garments. Some of the most well-known participants include Limited, Carter’s Inc, Fruit of the Loom, Gap Inc, Kohl’s Department Stores, LL Bean, Macy’s, Target Corporation, and Wal-Mart Stores, Inc.  The Alliance is accomplishing its mission through the use of a collective fund which was $42 million at the time of its creation.

The International Labour Organization has assisted the Alliance in the creation of an operational guide. The Alliance focuses on opening lines of communication between employees and management to ensure worker safety. Interviews with employees regarding existing safety practices and training are conducted and then safety discussions are coordinated between those employees and members of management. The Alliance also requires assessments be completed of garment manufacturing plants by independent engineers to certify worker safety and the structural soundness of facilities. After the initial evaluation and recommendations, the independent auditors return to confirm the changes previously discussed have been made as well as to assess the manufacturer’s ongoing compliance.

Had the Alliance been in place prior to the fire in 2012 the auditors would have found the illegally stored mounds of fabric and yarn, which accelerated the spread of flames, and required the materials to be stored in a more appropriate and safe manner. Another aspect of the fatal fire which could have been prevented was the allegation of factory managers directing employees to ignore the fire alarm. This wasted precious time for workers to exit the building safely. Ultimately, this lead many employees, trapped by the flames and smoke, to jump from upper floors to the rooftops of surrounding buildings or to their deaths. The tripartisan relationship that is created between the Alliance, employees, and management representatives is critical to ensure a clear, consistent message regarding basic employee safety. This communication helps to empower workers and could have encouraged them to challenge management’s direction to disregard the alarm when the fire broke out.

With regard to the building collapse of 2013, it was determined the four upper floors had been constructed illegally without permits. The three pronged scope of the Alliance (worker safety, fire safety, and structural soundness) again could have prevented this tragedy. In this situation, management at the garment manufacturing facility were aware of structural concerns before the collapse, but as in the case of the fire, ignored the risk and kept the factory open. Engineers working for the Alliance drill into factory walls to determine the structural integrity of the concrete and rebar used during construction to determine structural soundness.

Your Span of Control

These examples highlight the importance of maintaining a large span of control throughout your supply chain to ensure responsible sourcing. It is no small task to exercise this breadth of control for any company; however, companies can utilize the resources provided by the organizations listed above to develop their own requirements for responsible sourcing and supplier relationships. Companies can derive the maximum consumer exposure by enforcing responsible sourcing across their entire supply chain. It is also important to engrain this behavior into the culture particularly among employees who have the most interactions with the ultimate consumer.

Communicating to Your Customers

The fast food giant Chipotle consistently communicates its commitment to responsibly sourced ingredients in its signage, website, commercials, and in its direct to consumer communications at the individual locations. The pervasive nature of the company’s responsible sourcing efforts has been strongly rewarded by its ever-growing customer base. In a time where consumers are switching brands to support socially responsible companies, it is imperative to keep a company’s responsible sourcing objectives, actions, and accomplishments at the forefront of consumer’s minds.