Delivery Robots, Coming to a Suburb Near You 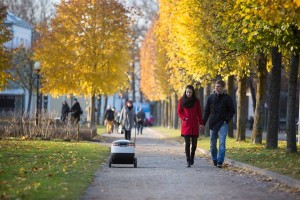 Robotics is a burgeoning field, one that Google has been so interested in they’ve been gobbling up companies such as Boston Dynamics and Redwood Robotics. The military is heavily interested into possibilities robots provide, with testing of a quadruped battlefield robots being tested recently at the Marine base in Quantico, VA. According to PCWorld, “The U.S. military is interested in the use of robots in combat because they can more confidently be sent into dangerous situations without the worry of loss of life.”

Two of Skype’s co-founders, Ahti Heinla and Janus Friis, have entered the robotics field as well, with plans to connect people with the items they need, rather than with other people. In a recent interview at Slush, a tech convention in Finland, co-founder Heinla stated, “We’ve always been attracted to big problems, and delivery is still a big problem, probably a bigger problem than helping people communicate over along distances.”

The small robots that each resemble a hard-cased piece of carry on luggage, move about like moon-rovers with chunky wheels. They are meant to deliver small items such as groceries, with a max weight of 40 lbs. In a smartly produced promotional video made by Heinla and Friis’ Estonian-based company, Starship, an adorable robot makes its way by modern, almost futuristic, homes in a well-kempt suburban neighborhood. The sidewalks are flat and the streets are pothole free —ideal terrain for these little guys. The joy, amazement, and satisfaction when the delivery reaches its destination —an attractive middle-aged woman— is palpable. The viewer wants to live in that sun-drenched utopia and receive such time-saving deliveries.

Then, doubt arrives. Is this cheaper, faster, and easier than current human delivery methods? Could this robot make its way over my neighborhood’s bumpy, brick, root-riddled sidewalks? What would happen in winter, when snow-packed sidewalks barely allow passage? One almost feels sorry for the robots, imaging them getting stuck, helpless in the elements. Then there’s the question of human behavior. The company claims that the robots cannot be opened without a specific code registered through an app. Will this prevent people from attempting to steal or damage the property?

Despite feeling dubious about the future of these robots, one wonders what will come of them. Surely people have learned from issues that delivery drones have encountered. Surely the company, with such successful co-founders, knows that this venture can work, right? Reading the literature on the company’s website, some doubts are put to rest. “Starship Technologies will introduce fleets of small, safe, practical, free from CO2 emission, and best of all, earthbound, delivery robots, which will create unprecedented convenience and cost savings for individuals, while opening up new opportunities for businesses such as parcel delivery firms or grocery stores.”

The November 2015 press release goes on to state, “For businesses, Starship’s technology eliminates the largest inefficiency in the delivery chain, the last mile. Instead of expensive and time-consuming door-to-door delivery, retailers can ship the goods in bulk to a local hub, then the robot fleet completes the delivery to the shopper’s door for a fraction of the cost.” Could this be the safe, cost-saving way of the future? We’ll see if these 4 mph little rovers make it in today’s fast-paced world. Look for robots coming your way in 2016.