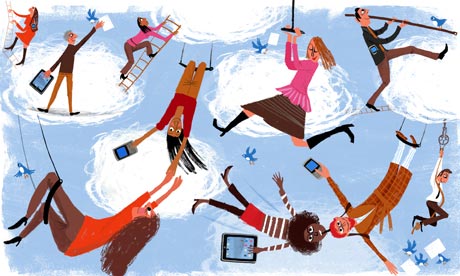 The world has changed drastically in the past few decades with the reach of technology. Many of us remember a time before cell phones, personal computers, and the Internet. I can recall learning about the World Wide Web during my senior year of high school. A librarian explained to me how research would drastically change in the future and how information could be accessed electronically. I couldn’t wrap my mind around what she meant, and not for lack of trying. Maybe if I had watched more Star Trek I would have better understood.

I also recall being in college and writing a letter to a Swedish friend, trying to explain to her that I had an email address and that we could write to one another through a computer. I gave her my new handy-dandy email address. She wrote back saying she didn’t know what the @ sign was. Clearly she, and all other Swedes, figured it out. We all did, didn’t we?

In an interview with strategy + business University of Michigan professor, Kentaro Toyama, has some fascinating things to say about technology and its role in our future. The former Microsoft executive, who previously championed technology as the answer to nearly all problems, refers to himself as a “recovering technoholic”.  As a way of introduction he says, “Think about technology as the engine of a car, and society as the driver. In many cases, we’re trying to build a faster and faster engine without paying attention to whether the driver knows where the car is going. This is what happens, for example, when we embrace the belief that using technology for global communication can create greater understanding among people.”

The Internet has brought benefits to the world in innumerable ways –from the outreach afforded to fundraising efforts, to convenient banking, to the ease of communication, to unprecedented amounts of research that can be scoured from the warmth and comfort of one’s living room. However, there is a darker side. Toyama goes on to cite examples such as the Internet that North Korea has built which is exclusive and oppressing, or the way ISIS has used the Internet for recruitment and the promotion of terrorism.

The leaders in the field, Toyama says, may have convinced themselves that technology is going to save the world. But technology is man-made, and it must be fostered and monitored with care. “The reality is that powerful technologies will work in exactly the direction we point them in. Almost paradoxically, as more technology becomes available, human judgment and wisdom matter more.”

Many studies have found that employers put weight on interpersonal skills. We all know the story of the brilliant scientist, engineer, artist, or entrepreneur who can’t control his temper, maintain a sense of order, or understand social norms. With the age of technology comes online learning and social media. Soft skills, such as empathy, communication, critical thinking, and collaboration, are necessary to the future, especially a future that plans to invest so heavily in technology, which does not feel and does not fully understand the human condition. Even President Obama has spoken about this,  “I’m calling on our nation’s governors and state education chief to develop standards and assessments that don’t simply measure whether students can fill in a bubble on a test, but whether they possess 21st century skills like problem-solving and critical thinking and entrepreneurship and creativity.”